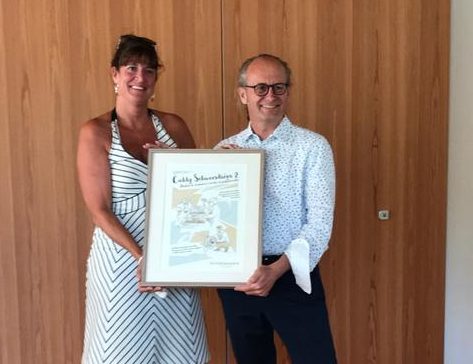 The organisation Stëmm vun der Strooss warmly thanks the Ministry of Sustainable Development and Infrastructure and the Secretary of State Claude Turmes for the award of the first prize of €5,000 for the “Klimaconcours fir Veraïner”. Present at the ceremony were the President of Stëmm vun der Strooss Marcel Detaille, Vice President André Theisen and Director Alexandra Oxacelay. This sum will be used to finance the Caddy Schweesdrëps 2 project and thereby continue to reduce food waste in Luxembourg.

Thanks to the financial support of the Ministry of Health and numerous donations, in 2016 Stëmm vun der Strooss created a professional reintegration workshop in which 20 people are supervised by two care workers, Sally Grüneisen and Sandra Cantin and by a part-time cook, Christiane Huberty. Since 2009, Stëmm vun der Strooss has had a partnership with Auchan. Thanks to this partnership, 127 tonnes of foodstuffs were reworked and redistributed in 2017 from Stëmm’s premises at 105, rue du cimetière in Bonnevoie. The hypermarket takes food close to the expiration date off its shelves as part of its quality freshness charter. 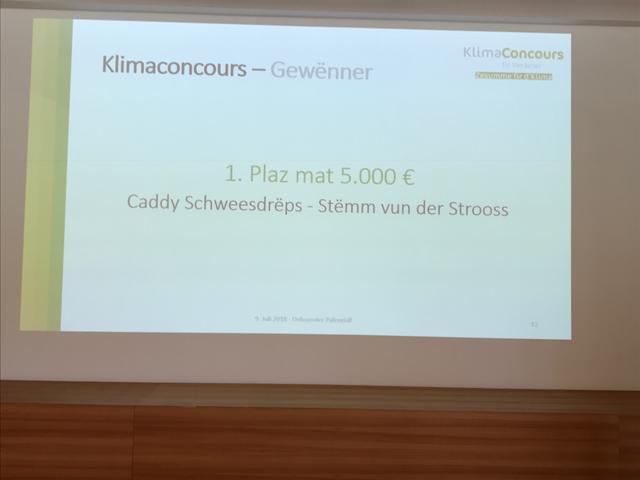 The Caddy Schweesdrëps 2 project has several objectives: firstly, the professional and social reintegration of 90 people suffering from addiction. Secondly, to fight against food waste by transforming foodstuffs for redistribution in Stëmm’s own social restaurants in Hollerich and Esch-sur-Alzette. These foods would otherwise end up in the trash. The goal in 2019 is to go from 127 tonnes to 500 tonnes of recovered, reworked and redistributed food. As such, this project aims to combat poverty and promote the professional reintegration of people far removed from the employment market.

This concept brings together social, ecological and economic aspects. Socially, Caddy Schweesdrëps 2 plans for disadvantaged people to return to the world of work, to join a working group and to promote the well-being of everyone. In addition, it protects the environment through the fight against food waste and the production of fresh juices, soups, salads, side dishes and sandwiches. As well as the economic aspect, the free distribution of food to the 300 people that are accommodated each day in the social restaurants of Hollerich and Esch and to 10 other organisations active throughout Luxembourg City.

At the award ceremony, it was pointed out that the demand of other supermarkets to donate free consumable food exists. In other words, a reduction of waste would be conceivable.