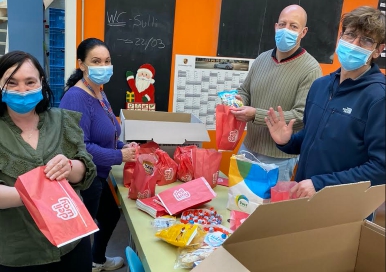 It all started with a flyer and a call for donations from the parents’ association of the commune Helperknapp in the beginning of the year. Thereupon, on the 11th and 12th of March, schoolchildren from the commune collected sweets, which were some days later handed over at the reception hall “An der Koll” to Marc Balthasar, in charge of the service Schweesdrëps from the Stëmm vun der Strooss.

The team of the Schweesdrëps lived up to the name of the service by packaging the sweets of a total of six boxes in smaller bags and delivering them to the social restaurants of the Stëmm vun der Strooss in Esch and Hollerich. There, just in time for Easter, the candies, pralines and cookies were distributed to the guests of the organization that supports underprivileged individuals. The treats were gratefully received and surely nibbled more or less quickly. Thanks to the donation of the children and parents from the commune Helperknapp, the Easter Bunny came by the Stëmm vun der Strooss and sweetened the festival.heureux.