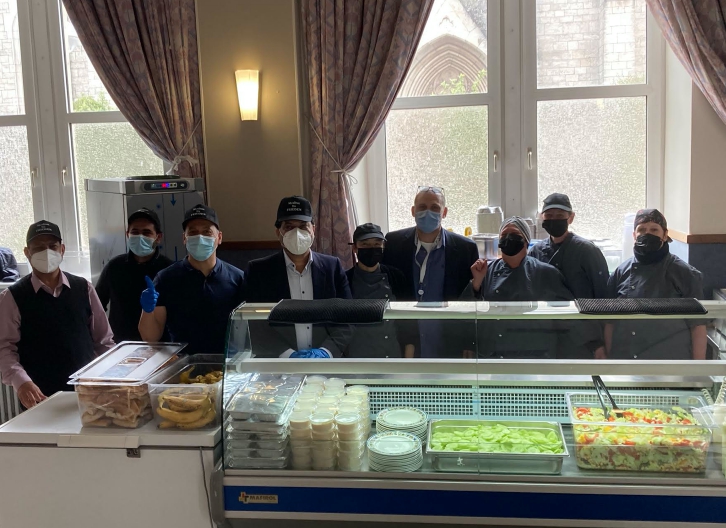 On April 18, the social restaurant from the Stëmm vun der Strooss located at 21, rue de l’Église in Esch-sur-Alzette, opened its doors exceptionally on a Sunday for their clients. Thanks to the collaboration with the Association Musulmane Ahmadiyya Luxembourg (AMAL), the less privileged people had the opportunity to discover the various tastes of Indian cuisine.

For some time now, the association wanted to support the Stëmm vun der Strooss with a humanitarian action which symbolizes their own values of an open-minded and cosmopolitan society. This led to an event in which people from very different cultural and religious backgrounds came together in a casual atmosphere. Organizing such an event during Ramadan was not an issue but even quite the opposite as charity plays an important role during this month. That is the reason why the people from AMAL were even more eager to offer their help during that period.

The menu offered various traditional dishes such as a lentil soup, chicken with potatoes in a tomato sauce, rice and the typical Indian naan bread. To finish off this generous lunch, an almond crème was served for desert. Altogether, the Association Musulmane Ahmadiyya Luxembourg offered 120 meals to disadvantaged people. The Stëmm vun der Strooss took
charge of the drinks and the employees, who are in a professional reintegration system, served the clients.

“It felt like sitting in a restaurant, the atmosphere was delightful and the joy on people’s faces was fabulous to see”, resumed enthusiastically Francesco Settanni, person in charge of the facilities from the Stëmm vun der Strooss in Esch-sur-Alzette.Mr Settanni pointed out how satisfying an event can become when people from very different cultural backgrounds come together and leave any possible prejudice aside.