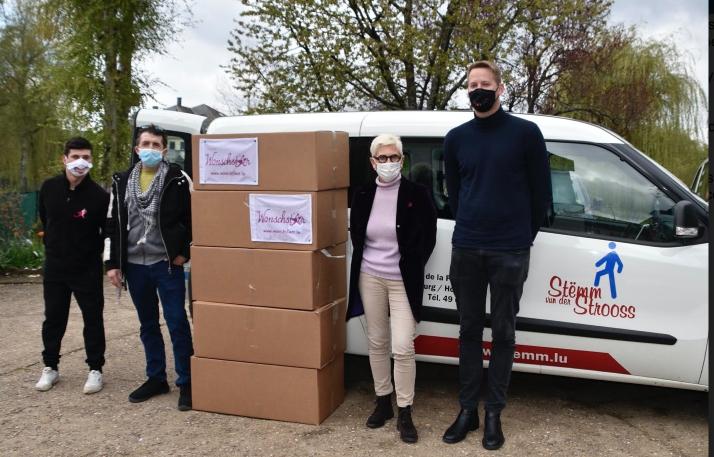 On Friday 7 May, the Fondation Wonschstär handed over 75 pairs of new trainers for men and women to the Stëmm vun der Strooss. An appeal launched by the Stëmm in April to collect shoes had caught the attention of Mrs Viviane Vermeer, President of the Fondation Wonschstär. This foundation aims to help sick and disadvantaged people and to fulfil dreams that make their everyday lives easier and bring some moments of joy and happiness.

This is not the first time that the Stëmm vun der Strooss can count on the support of the Fondation Wonschstär, since in 2016 the association already supported the Stëmm in Esch-sur-Alzette with a Christmas campaign. In 2017, more than a hundred different wishes from the Stëmm’s customers were fulfilled, such as clothes and sleeping bags, as well as trips, bicycles, games consoles and many more.

This shoe donation, made possible thanks to the generosity of the Dutch company Theo Henkelman, comes more than handy at the present moment. To supply the Kleederstuff in Hollerich and Esch-sur-Alzette, the Stëmm has a great need for shoes in good condition, as it is explained by Claude Consdorf, person in charge of the Kleederstuff: “The people who ask us for help, often only own the one pair of shoes they are wearing at the moment and
since they live on the streets, the shoes naturally wear out faster and need to be replaced regularly. I advise donors not to be ashamed to donate shoes to us, as we really need them.

The Kleederstuff is one of the Stëmm’s facilities that pursues the goal of vocational reintegration and employs 10 people. They sort and wash the clothes they receive and then redistribute them to those in need.

The Stëmm vun der Strooss honours the generosity of the Fondation Wonschstär, which made this shoe wish possible. Thanks to such donations, people in need are given the opportunity to dress appropriately for different occasions and thus regain a piece of their dignity.